I’ve had this Mirror Dress for quite some time, even had it hanging on the wall before giving it a makeover. Never really was a fan of the base color and several of the purple jewels were missing, so these always felt incomplete.  I’m not really sure where the mirror is originally from and Google has been no help, this one came from the GW (Goodwill).  One day Dave and I decided to check out our local GW where there it was sitting up on the highest shelf. 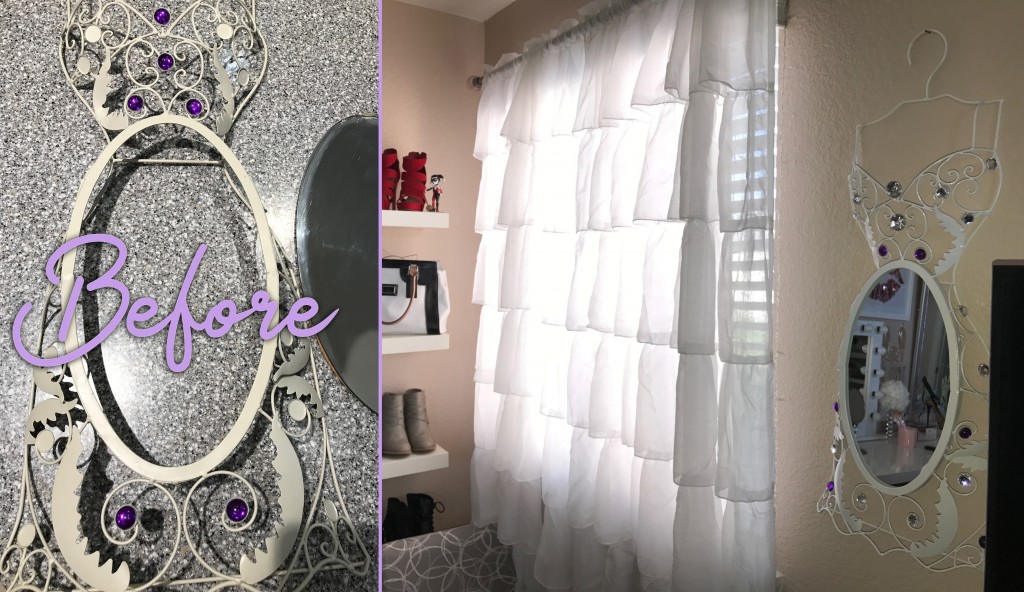 When it caught my eye my feet went straight to it and I grabbed it so quickly, cause you know if you see something don’t ever put it down or when you go back it will be gone.  It was just so uniquely different that it just had to come home with me but just needed some TLC.  After much thought, I decided to spray paint it white while adding blingy jewels to the empty spaces and keeping the purple ones.   Even though the purple ones were being kept, they were still popped off for it to be sprayed painted which actually worked out great because I was able to display them better.

First pop off all the jewels then removed the mirror so you can spray paint.  I chose just a sating white that was sprayed on each side three times, then with a final coat of Krylon Fusion Plastic which also works on metal to provide a super bond so that it will be chip resistant. 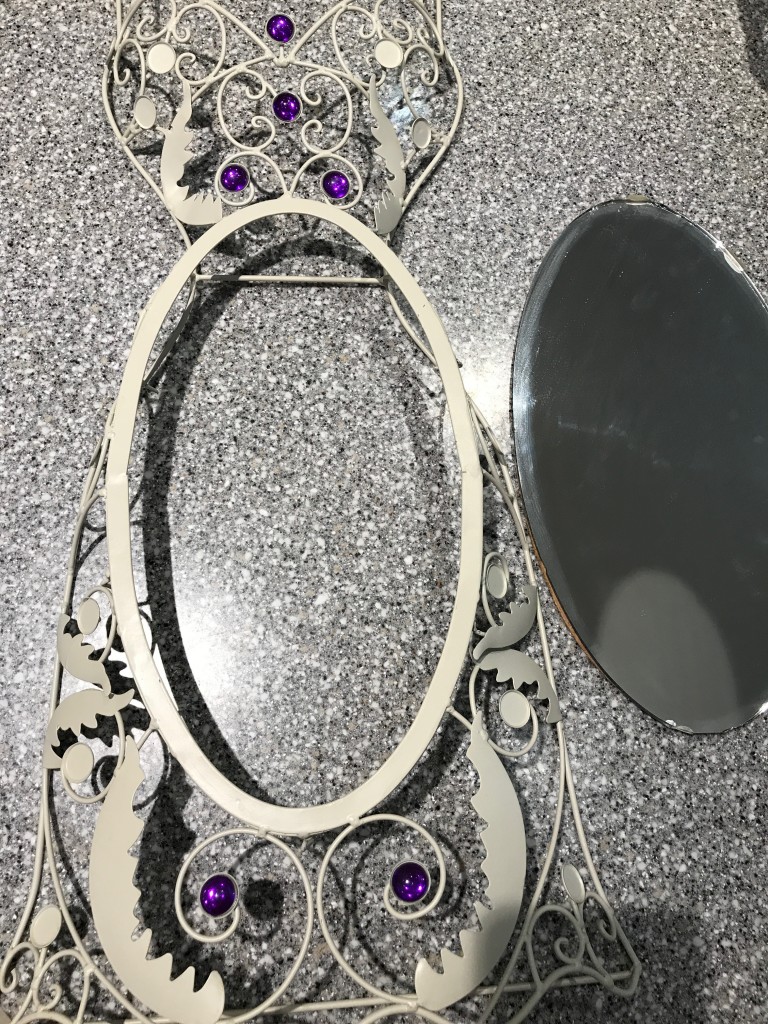 Next add the blingy jewels, which are actually buttons from Jo-Ann’s and the girl who worked there was no help after showing her the purple one she told me to go the flower sections where they have the bags of rocks.  This was not what the purple one looked like, so I just decided to find them on my own and found the buttons that were perfect to me.  For some reason, maybe a lot was on my mind that day, but I had no count of how many were needed, so another trip needed to be made. 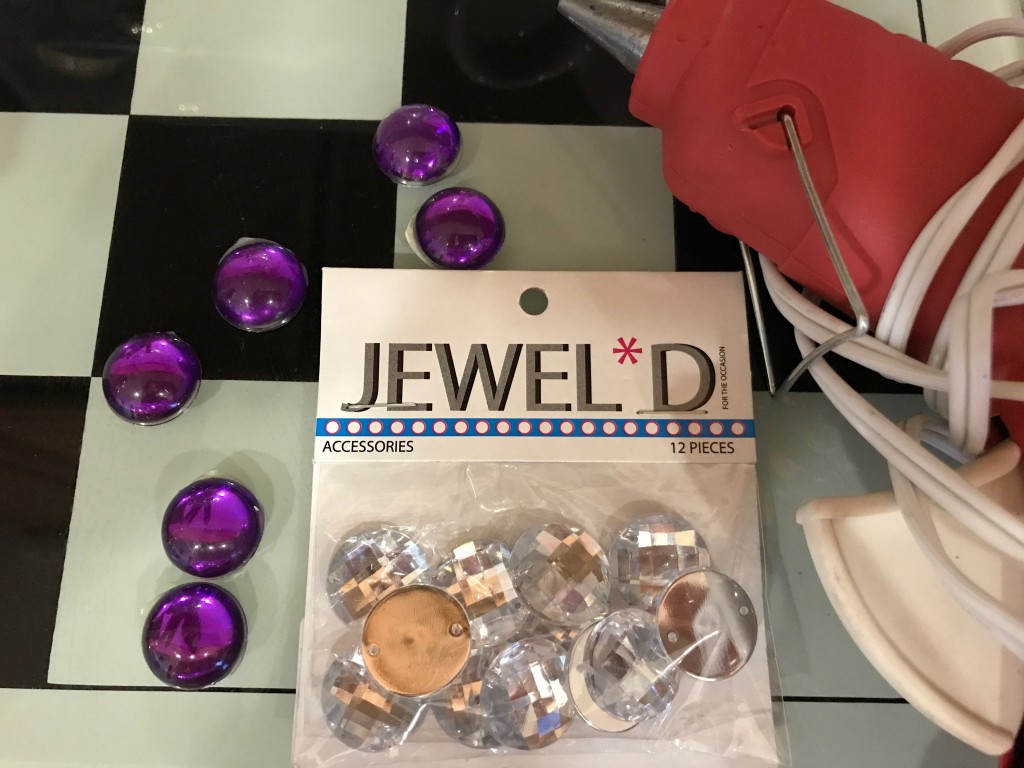 While being short some blingy jewels and before making a trip back to Jo Anns, I remembered having these bigger bling buttons from a previous project and they worked out great being placed in the top two empty spaces and it’s like I even had that planned.

Good tip: Place all the jewels on first to get the setup correct, then glue them on.  After being applied, the mirror was installed and the project was complete!!!! 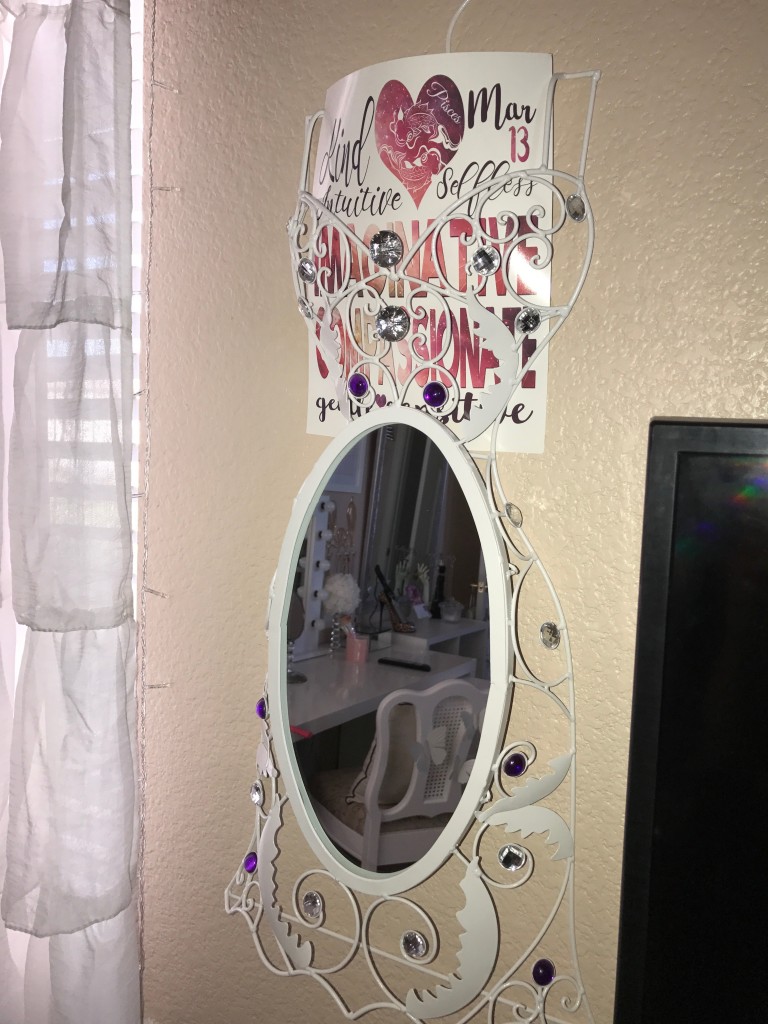 This mirror cost me $10.99 making me think “was this overpriced?” but after much thought, this to me is now priceless and worth every penny!!! I’m loving this mirror, it is so beautiful and one of kind like myself 🙂

Thanks so much for stopping by!