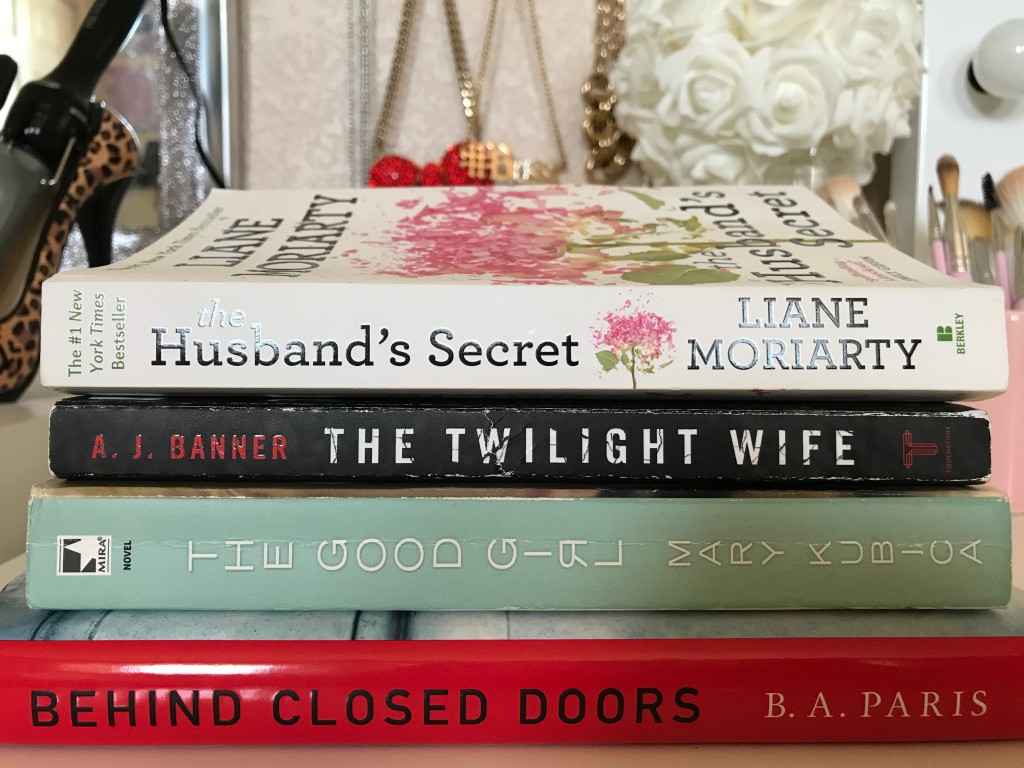 Big Little Lies is a brilliant take on ex-husbands and second wives, mothers and daughters, schoolyard scandal, and the dangerous little lies we tell ourselves just to survive.

Dave had a Doctor appointment and I needed a book to read while waiting for him. The day before the appointment we stopped by the book section at Target and spotted a few copies of Big Little Lies.  After hearing good reviews about the book and the HBO show, I decided this would be the book for me.

While reading the first page, I knew this would be a hard book to put down. The author sucked me right in and I kept wanting to turn the page to see what would happen at trivia night. Even though my predictions were correct about where the story was going, it was still a very entertaining read.  The three main characters were likable and it was great to see the way they bonded with all the craziness that was surrounding them.  This book has been one of my favorites to read this year.  With this book, I paid it forward to a good friend and she will do the same. Since I liked the book so much, hopefully, others will too!

The HBO show didn’t suck me in at first like the book did, but by the last episode, I had tears in my eyes making me feel the bond even more between the three main characters.  There were many changes from the book but by the end of the series, it all came together beautifully.

The Husbands Secret is a novel about how well it is really possible to know our spouses—and, ultimately, ourselves.

I really wanted to like this book because Big Little Lies was such a great read.  This book was not a page-turner and honestly didn’t flow as well as the previous book by Liane.  Before you even know the secret you will figure that out all on your own.  The author doesn’t do a very good job of trying to make it a surprise.  There were also characters in the book that didn’t need to be there, making me feel like they were just placed to fill up the pages.  Honestly, it felt like I was reading separate stories in the same book.  The only good thing to take away is if you knew a really terrible secret, would your choices be the same or different from the main character.

I will not give up on the author, but this was a thumb down for me.

The Good Girl is a novel that reveals how even in the perfect family, nothing is as it seems. When Colin decides to hide Mia in a secluded cabin in rural Minnesota instead of delivering her to his employers, Mia’s mother, Eve, and Detective Gabe Hoffman will stop at nothing to find them. But no one could have predicted the emotional entanglements that eventually cause this family’s world to shatter.

Maybe this is what also made the book enjoyable and became a page turner to see if my guess was the correct one.

The Twilight Wife is a novel about truth becomes a terrifying nightmare.  A twisty, immersive thriller, that will keep readers enthralled through the final, shocking twist.

This book was a very quick read for me, flying through those pages like I had to write a paper on this book because it was due the next day.  The Twilight Wife had me wanting to turn the page so I could know what was going to happen next.  The main character has memory loss so you can really rely on her about what is truly going on, but when the pieces all start coming together, you really see how twisted the story is.

This book isn’t perfect either but it is a great read and I would recommend it!

Behind Closed Doors is a novel about The perfect marriage? Or the perfect lie?

Behind Closed Doors was a book that left me shook.

This book had me on the edge of my seat waiting to see what would happen next.  While reading you know something isn’t right but boy that twist left my mouth opened.  When you find out what is really going on, you just want to keep reading to see how the story will end.  The book was not disappointing and is my second favorite read after Big Little Lies. I give this one two thumbs up!

It was suspenseful and entertaining, so don’t miss out on this one.

Books read in the past that are a great read:

Libby Day was seven when her mother and two sisters were murdered in “The Satan Sacrifice” of Kinnakee, Kansas. She survived—and famously testified that her fifteen-year-old brother, Ben, was the killer. Twenty-five years later, the Kill Club—a secret secret society obsessed with notorious crimes—locates Libby and pumps her for details.

Fresh from a brief stay at a psych hospital, reporter Camille Preaker faces a troubling assignment: she must return to her tiny hometown to cover the murders of two preteen girls. For years, Camille has hardly spoken to her neurotic, hypochondriac mother or to the half-sister she barely knows, a beautiful thirteen-year-old with an eerie grip on the town.